AD is one of the most common cause of senile dementia and is characterized by the presence of extracellular senile plaques composed by amyloid beta (Aβ) peptide. The cognitive impairement, typical of this disorder, has a drastic impact on the lives of patients and has a progressive evolution which ultimately leads to death. The neocortex is one of the anatomical areas most strongly impacted by AD and the access to human neocortical neurons is pivotal for AD-related investigations and drug screening. To this purpose, the Cellular Engineering Laboratory at FPS has developed a solid workflow for the generation of functional human neocortical neurons from iPS cells which are tested for their intracellular response to Aβ oligomer insult. 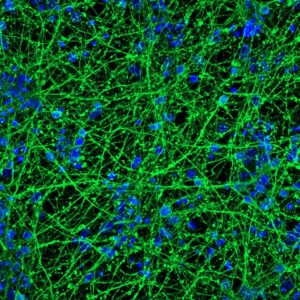 Confocal imaging of human neocortical neurons derived in vitro from pluripotent cells. Neurons are stained for beta-3-tubulin (in green) and DAPI (in blue).